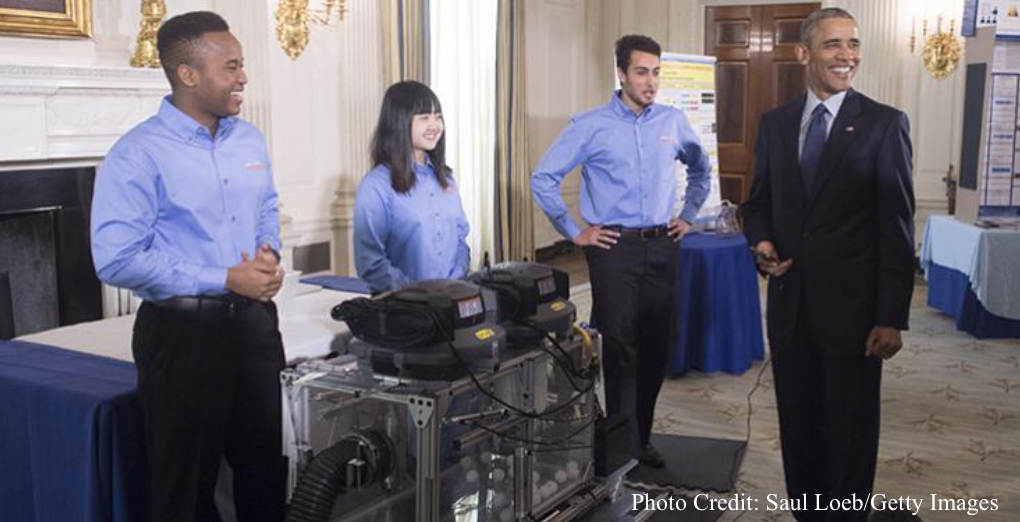 The White House Science Fair fulfills a commitment the President made at the launch of his Educate to Innovate campaign in November 2009 - to inspire boys and girls to excel in math and science. The President created the Science Fair with a simple credo: “If you win the NCAA championship, you come to the White House. Well, if you're a young person and you produce the best experiment or design, the best hardware or software, you ought to be recognized for that achievement, too.”

Si Ya “Wendy” Ni, Amro Halwah and Stephen Mwingira represented the Baruch College Campus HighSchool InvenTeam. The team invented a modular cleaning device that attaches to existing trains on city subway tracks. They were inspired to improve their city’s transportation system by making it cleaner and more efficient for school children, like themselves, who take the New York City subway to school every day. The students were often delayed getting to and from school because of rubbish fires in the subway system.

Kiona Elliot and Payton Kaar represented the Northeast High School InvenTeam on their return trip to the White House. In 2012, the Northeast High School InvenTeam invented a portable, bicycle-powered emergency water filtration station that uses cloth filtration and an ozone sanitizer to eliminate pathogens like Vibrio cholera and E. coli from contaminated water. Kiona, a junior at the University of Florida, and Payton, a sophomore at the University of Miami, presented their invention to President Obama at the third White House Science Fair in 2013, and returned this year to speak on a panel about their interest in invention, their experiences as young inventors at the White House Science Fair, and their STEM fields of study in college with an audience of educators and parents.

“It is a tremendous accomplishment and great honor for these young inventors to represent the work of their fellow InvenTeam members,” said Leigh Estabrooks, the Lemelson-MIT Program’s invention education officer.

“This event not only serves as recognition for their hard work but also of the hard work and dedication of great STEM teachers for Wendy, Amro, Stephen, Kiona and Payton to share their passion for inventing solutions to real-world problems. These inspiring students are truly making a difference in their communities and the world by applying science, technology, engineering and math to solve pressing issues.” 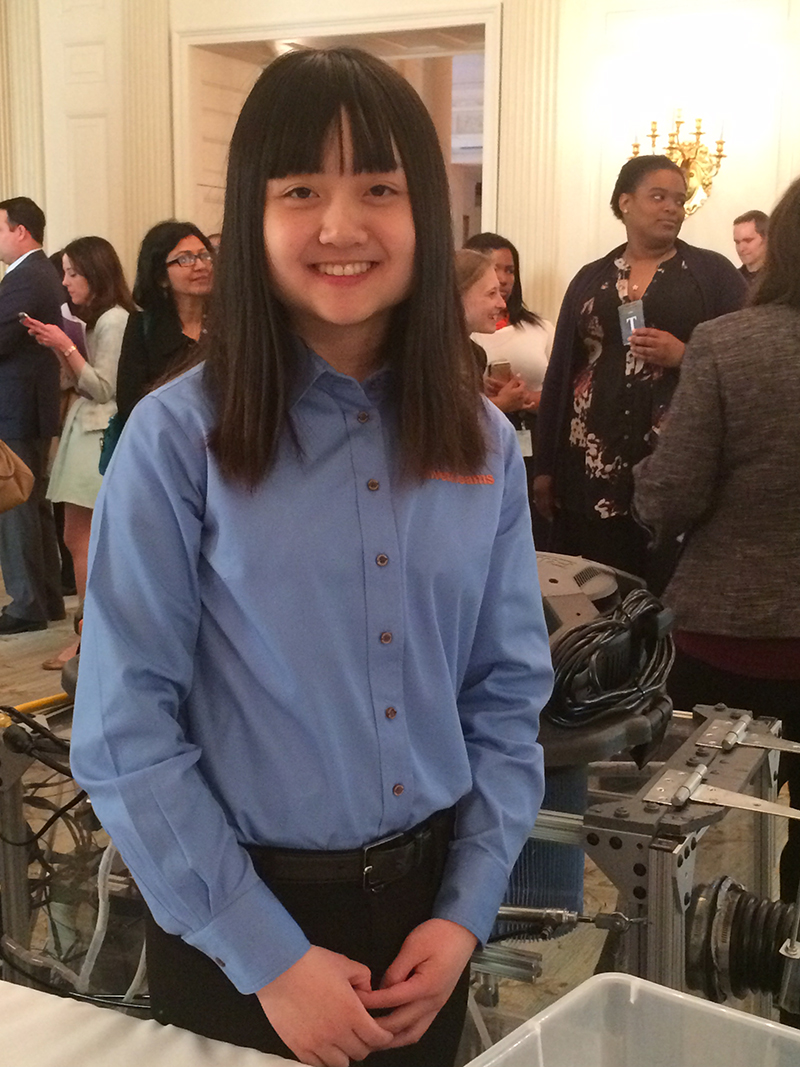 Si Ya “Wendy” Ni
Wendy was a senior during her InvenTeam year and has since graduated from Baruch College Campus High School and matriculated to Marist College. She was born in the U.S. and grew up in New York City’s Chinatown and is the first person in her family to attend college. She was a team leader on the InvenTeam and was instrumental in the overall design of the invention. This project confirmed her desire to pursue a career in a technology field and she is currently majoring in computer science. Wendy remains committed to her high school and InvenTeam, returning occasionally to encourage mentors to continue supporting the team and to work with the new students.

Amro Halwah
Amro is currently a senior at Baruch College Campus High School. He moved to the U.S. from Egypt when he was in eighth grade, knowing very little English. Today, Amro is on the school’s debate team, active in Model United Nations and passionate about his InvenTeam’s project. He has been inspired by his education in the U.S. and found that participating in the InvenTeam initiative has motivated him to pursue engineering; he took a great interest in the software, hardware and construction of the team’s invention. 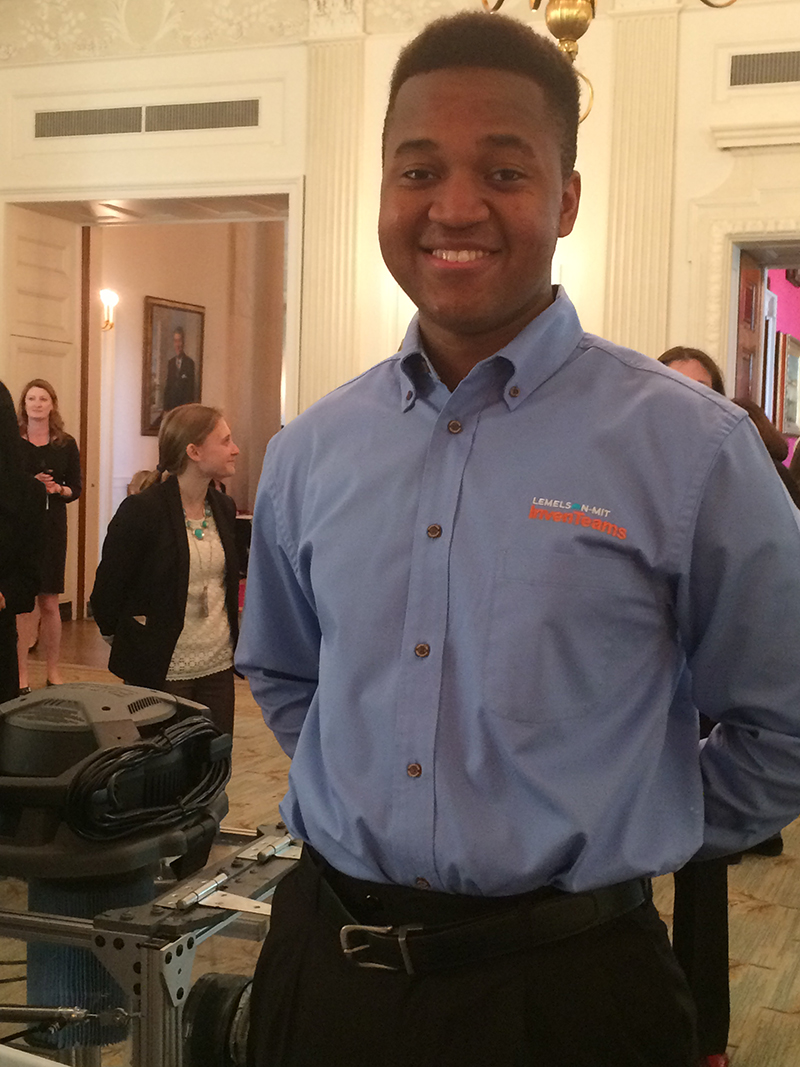 Stephen is currently a junior at Baruch College Campus High School. He came to the U.S. in 2008 with his mother, a diplomat at Tanzania Mission to the United Nations, knowing only Swahili. Participating in the InvenTeam initiative has been a growth experience for Stephen. He makes significant contributions as a chief troubleshooter, working with the pneumatic system, selecting robust materials and designing software for the invention. Stephen does a lot of coding outside of the InvenTeam project and he hopes to pursue a career in either computer science or engineering.

Kiona Elliot
Kiona graduated from Northeast High School in 2013 and is currently a junior at the University of Florida studying horticulture with a focus on plant molecular and cellular biology. Kiona, a Gates Millennium Scholar, is the first in her family to attend college. She developed a deep interest in food insecurity and world hunger and is researching ways to produce healthy, nutritious food to feed the world’s growing population. She founded an organization on her college campus called S.T.E.A.M. Academy that serves to inspire other students to use science, technology, engineering arts and mathematics in conjunction with social responsibility to solve global issues.

Payton Kaar
Payton graduated first in her class from Northeast High School in 2014 and is currently a sophomore at the University of Miami, majoring in anthropology with a focus on primatology. She received The Leonore Annenberg Scholarship and is the first in her family to attend college. Her educational goal is to conduct research with baboons or gorillas after being inspired by her cultural anthropology college classes. 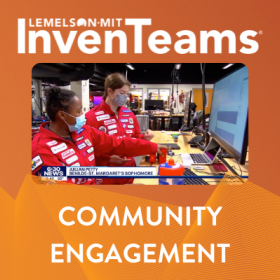 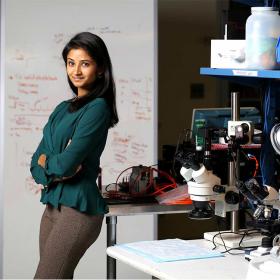 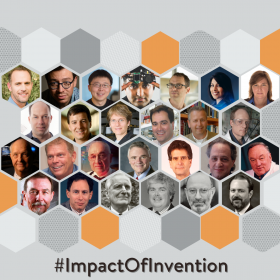 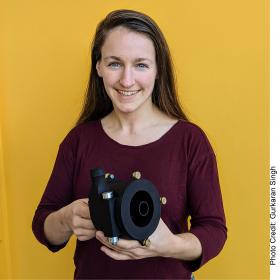