Vinton Cerf is an American computer scientist and considered one of “the fathers of the internet.” Within ten years of graduating from high school, Vinton Cerf had begun co-designing and co-developing the protocols and structure of what became the internet.

Cerf was born on June 23, 1943 in New Haven, Connecticut to Vincent Thurston Cerf and Muriel Cerf. The family moved to Los Angeles, California and Cerf graduated from Van Nuys High School, alongside future scientists Jon Postel and Steve Crocker. Cerf subsequently entered Stanford University, and graduated in 1965 with a bachelor’s degree in mathematics. During this time, Cerf met his future wife Sigrid at a hearing aid agents’ practice, since they both have hearing deficiencies. Cerf's skills were in computer science, then considered by most to be a quirky subcategory of math or electrical engineering. However, computer science was emerging at several graduate programs, corporations, and government agencies. As it turned out, Cerf proved himself in all three realms.

After two years working as a systems engineer at IBM, Cerf pursued graduate studies in computer sciences at the University of California at Los Angeles (UCLA). There, he earned a master’s degree in 1970 and a doctorate in 1972. While at UCLA, Cerf met Robert (Bob) Kahn, who was working on the ARPANet system architecture, the technical foundation of the internet. Cerf returned to Stanford from 1972-1976 to work as an assistant professor, focusing on network interconnection protocols.

In 1973, Kahn called on Cerf to help develop a better protocol, one that had sufficient flexibility and reliability to meet the challenges of interference with transmissions and disparity of sources. Over the next five years, Kahn and Cerf solved these problems by inventing the twofold Transmission Control Protocol / Internet Protocol ("TCP/IP"). Simply stated, TCP/IP allows for the "handshake" that introduces distant and different computers to each other in a virtual space. TCP controls and keeps track of the flow of data packets, while IP labels and forwards individual packets. TCP/IP, which became the required protocol of ARPANET in 1983, also allowed ARPANET to expand into the internet, facilitating features like remote login via Telnet and, later, the World Wide Web.

In 1994, Cerf returned to MCI (later Worldcom), where he became Senior Vice President for Internet Architecture and Technology. From 2000 - 2007, Cerf served as chairman of the Internet Corporation for Assigned Names and Numbers (ICANN), the group that oversees the internet’s growth and expansion. In 2005, Cerf departed MCI to become vice president and “chief internet evangelist” at Google Inc., focusing on how technology will affect future society.

Cerf also served on the Presidential IT Advisory Committee and the boards of numerous companies and foundations, such as the Internet Society (President, 1992-1995). He appears on, and consults for, various television shows. Finally, as Distinguished Visiting Scientist at the Jet Propulsion Laboratory, Cerf is designing an interplanetary internet.

Vinton Cerf's honors include numerous fellowships and honorary degrees, the Kilby Award, IEEE's Alexander Graham Bell Medal, and the National Medal of Technology, received jointly with Bob Kahn in 1997 from President Clinton. In 2005, Cerf and Kahn received the highest civilian honor bestowed in the U.S., the Presidential Medal of Freedom. It recognizes the fact that their work on the software code used to transmit data across the internet has put them "at the forefront of a digital revolution that has transformed global commerce, communication, and entertainment." In 2006, he was inducted in the National Inventors Hall of Fame along with fellow scientist Bob Kahn. In 2012, Cerf was inducted into the Internet Hall of Fame, and was bestowed the Queen Elizabeth Prize for Engineering in 2013. In 2014, he received the French Legion of Honour.

Cerf remains a key player in the evolution of the internet. Cerf’s hobbies include fine wine, gourmet cooking and science fiction. Cerf and his wife, Sigrid, have two sons, David and Bennett. 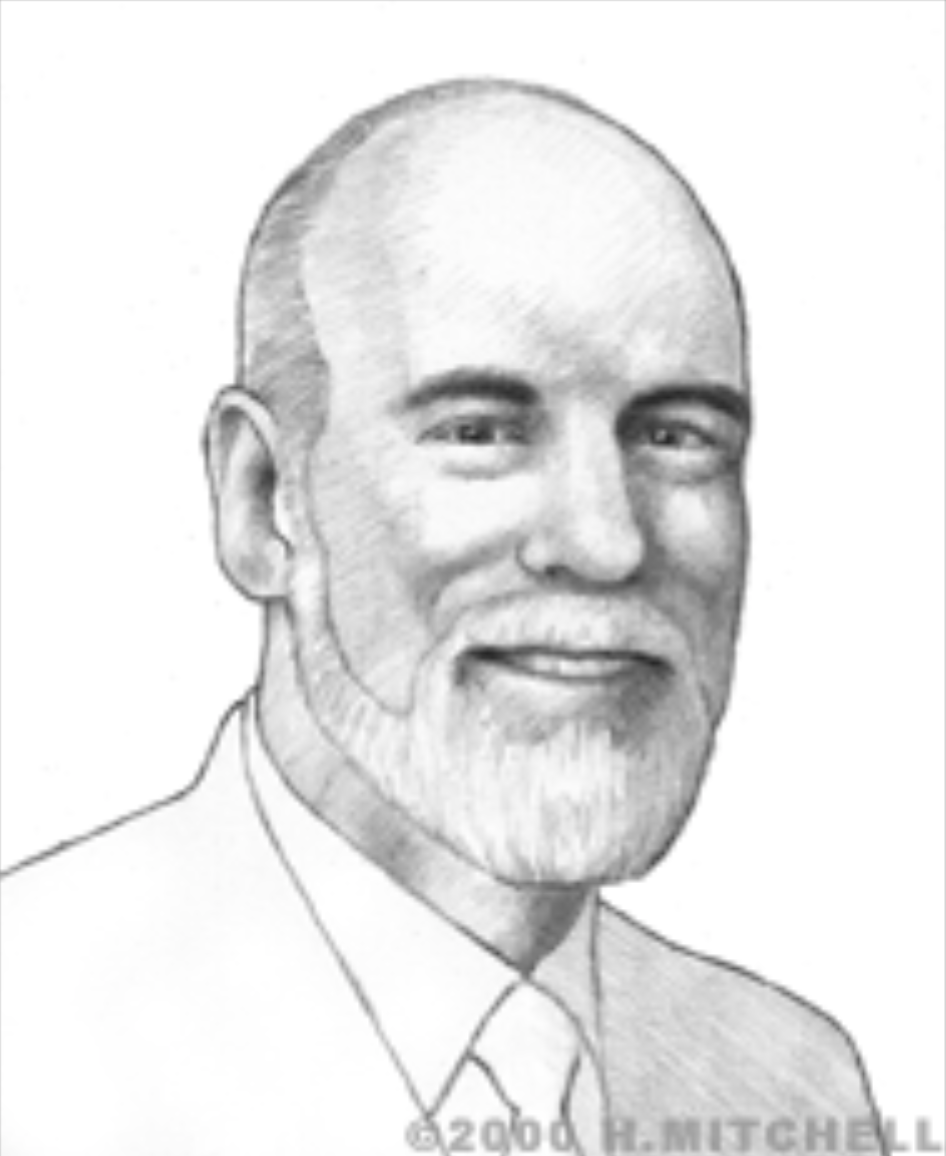