What drink could be more integral to the American athletic scene than Gatorade? The beverage that is present at virtually every football game, soccer match, and road race was invented in 1965 by Dr. Robert Cade. Born in 1927 in Florida, Cade was trained at the University of Texas Medical School in Dallas as an internist and nephrologist. He was working as a medical researcher at the University of Florida when a football coach there became frustrated that his players were unable to keep going strong in hot weather, despite drinking lots of water. He asked his team doctor, one of Cade’s associates, for help.

Cade was intrigued with the problem and led a research team in investigating the reasons that water wasn’t enough to hydrate athletes on the playing field. They studied the effects that loss of fluid and electrolytes has on bodily conditions, such as blood pressure and body temperature. The team set about finding a way to replace water, salts, and minerals lost during a heavy workout, so athletes could remain energized, healthy, and strong during a game. Cade and his team tried several concoctions and finally came up with a winning formula consisting of water, sugar, sodium, potassium, phosphate, and lemon juice. Cade patented the drink, calling it "Gatorade" (after the university’s football team, “The Gators”) at the suggestion of a colleague.

When the Gators credited the drink with their first Orange Bowl win in 1967, Gatorade gained instant notoriety and garnered media interest. Cade offered his patent rights to the University of Florida, but they turned him down, so Cade partnered with Stokely-Van Camp, who mass-produced and distributed the drink. The Quaker Oats Co. bought Stokely-Van Camp in 1983.

Gatorade became a household name when the tradition of pouring the Gatorade jug over the head of the winning team’s coach at the end of the Super Bowl began with the New York Giants’ win in 1987. When the Quaker Oats Co. was acquired by PepsiCo in 2001, Gatorade was well on its way to worldwide sales in the billions. The brand has since expanded to include other products such as energy bars as well as more than 15 Gatorade flavors.

Meanwhile, in 1973, Cade and the University of Florida were able to strike a deal that allows the university to reap royalties for Gatorade each year. Cade worked as a professor of medicine and physiology there, conducting research on kidney and liver disease, diabetes, hypertension, and other illnesses until his death in 2007. He also studied Down syndrome, autism, and certain types of schizophrenia and developed diets to help these patients improve or recover. In addition, Cade developed products similar to Gatorade such as the Go Energy-Recovery Shake, which helps athletes recover more quickly after a workout. 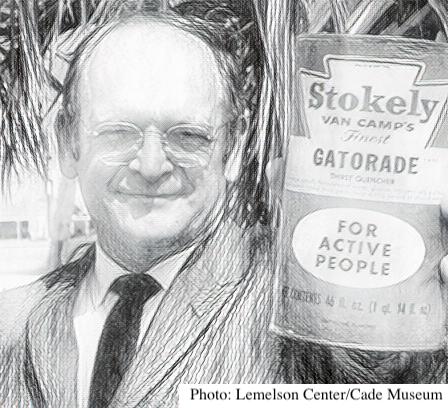