In an attempt to record the sound of a heartbeat, Dr. Wilson Greatbatch inadvertently created something far more crucial—a device that emitted electricity pulses to the heart. It was this discovery that led to the implantable cardiac pacemaker and distinguished Greatbatch as having created one of the most significant inventions of the 20th century. In 1996, he was honored with the Lemelson-MIT Lifetime Achievement Award.

Greatbatch first learned of heart block—a condition in which a nerve fails to send electrical impulses to make the heart work—while talking with two surgeons visiting Cornell University in the early 1950s. At the time, combating heart block was done with a painful electric shock delivered via bulky external equipment. Greatbatch was convinced he could invent a smaller, implantable device.

Then, quite by accident, Greatbatch's "eureka moment" happened in 1958. Transistors had recently become available, and Greatbatch was building an oscillator with one transistor to record heartbeat sounds. He incorporated the wrong transistor, which produced a pulse that mimicked the rhythm of a heart. "I stared at the thing in disbelief, thinking this was exactly the properties of a pacemaker," said Greatbatch.

Greatbatch licensed his invention to Medtronic, Inc., and the first pacemaker was implanted in a human in 1960. He upgraded his device with a lithium iodine battery for durability in 1970, and his invention has been saving lives ever since.

Greatbatch showed a commitment to educating children through inspirational speeches at schools and museums. He also established the Eleanor and Wilson Greatbatch Foundation to donate money to schools and other causes.

Greatbatch acquired three patents with scientist John Sanford in the 1980s and 1990s for methods of inhibiting the replication of AIDS and another similar virus in cats.

Greatbatch was born in 1919 in Buffalo, NY. U.S. Naval service in World War II enabled him to receive a bachelor's degree in engineering from Cornell University as a GI Bill student (1950). He received a master's in electrical engineering from the University of Buffalo (1957), succeeded by four honorary degrees. Greatbatch, who held over 220 patents, was a member of the National Inventors Hall of Fame and the National Academy of Engineering, among others. Greatbatch passed in September, 2011 in Williamsville, NY. 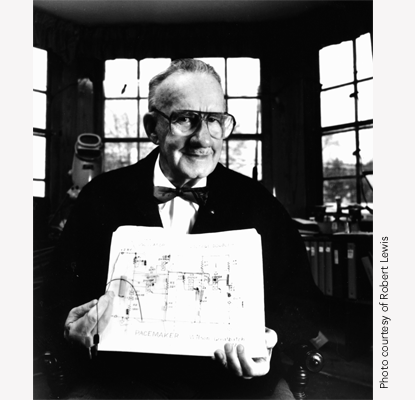