Tyler Clites, a PhD candidate in the Harvard-MIT Program in Health Sciences and Technology, says his fascination with invention began when he was a child. Long before he discovered that an engineer was anything other than someone who drove a train, he remembers proudly proclaiming, “I want to be an inventor when I grow up!” Every summer throughout his childhood in rural Dunbarton, New Hampshire, he attended Camp Invention, where he learned to design and prototype original solutions to common problems. Some of his first inventions included an automated egg cracker and a remote-controlled submarine for retrieving items that fell into a pool. Inspired and excited by what he learned at this summer camp, he went on to start an informal “inventor’s club” at his elementary school.

After high school, Tyler began his undergraduate studies at Harvard University. Upon completing his freshman year, in what would prove to be a life-changing decision, he took a leave from school and embarked on a two-year religious mission to rural Brazil. There, working with many individuals who suffered from diabetes and post-stroke complications, he learned of the devastating impact that mobility limitations can have on a person’s quality of life. His missionary experience transformed his view of the world, and the values that he learned continue to play a driving role in his life. After returning to Harvard, he was determined to invent meaningful solutions to difficult problems in the field of rehabilitation and assistive robotics. He graduated from Harvard in 2014 with a bachelor’s degree in biomedical and mechanical engineering.

Tyler maintains this inventive focus in his current PhD studies at the Massachusetts Institute of Technology (MIT), where he most recently developed the Agonist-antagonist Myoneural Interface (AMI) system, a new surgical method to enable bi-directional communication between the human nervous system and external bionic devices. The AMI works to connect the brain to a prosthesis in a manner that more closely replicates the biological control experience. Since his sophomore year at Harvard, Tyler has also been working with the Biomechatronics group at the MIT Media Lab to improve technologies for physical rehabilitation and augmentation. His additional inventions include Pollex Grasp, an at-home wearable therapy device that improves and restores motor function and dexterity in the thumbs of persons with neurologically-caused hand disabilities; a neurally-controlled exoskeleton for a rabbit; and a robotic prosthesis for a goat. His portfolio of work earned him the 2018 $15,000 “Cure it!” Lemelson-MIT Student Prize.

Starting with his mission to Brazil, Tyler’s passion for teaching and mentorship has become a large part of his life. One of his most rewarding volunteer experiences has been to serve as a residential freshman proctor at Harvard College for the last three years. As a proctor, he works to build community among 33 first-year students as they acclimate to the challenges of being a student. For the last two years, he has served as the head Teaching Assistant for Human 2.0, a lecture series and project course at the MIT Media Lab that explores cutting-edge research in the space of human augmentation. Tyler also serves as a guest lecturer for various undergraduate courses at MIT and Harvard, mentors undergraduate researchers at MIT and surrounding schools, and dedicates time to working with several high school students who have reached out to him about school projects or research.

Tyler plans to continue inventing throughout his career. His long-term professional goals are to become a professor and a researcher, invent imminently-translatable solutions to long-standing clinical problems, and establish a research environment where inventiveness and mentorship are held in the highest esteem. 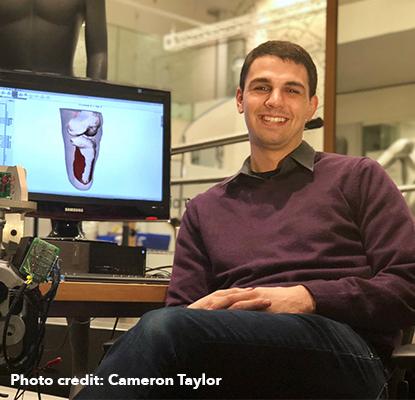