"As long as I can remember, I was always taking things apart," said Thomas Massie—inaugural winner of the $30,000 Lemelson-MIT Student Prize. As Massie got older, he eventually began to put these things together and learned to build—producing mechanical robots from household items and even an automatic plant-watering device. As an adult, he continued this passion, building a machine that simulated the native Andean hand-weaving process and the successful PHANTOM 3-D Touch interface for computers.

The PHANTOM—Massie's most notable invention—is a haptic computer interface that enables users to "feel" physical objects in cyberspace. By inserting their fingers into swiveling thimbles that connect to mechanical arms, users are able to sense the shape, size and consistency of objects on a computer screen. The PHANTOM allows designers and engineers to create and interact with objects in 3-D without actually building them. It can even train doctors to perform surgery on "virtual patients." Massie collaborated with MIT Professor Kenneth Salisbury at the Artificial Intelligence Lab to develop and build the prototype.

Massie started SensAble Technologies to market the PHANTOM from his dorm room at MIT in 1993. The company has since evolved and has worked with clients such as Disney, Boeing, and Addidas, among others. Other applications of the PHANTOM are the FreeForm™ Modeling System and the Ghost Software Developer's Toolkit, which both aid in creating virtual models.

Massie earned his SB in electrical engineering and SM in mechanical engineering at MIT. At present (2008), he raises cattle on his farm and is building an off-the-grid, timber-frame house that is held together with wooden pegs and powered by solar panels. He is also exploring alternative energies through the production of methane from cow manure. 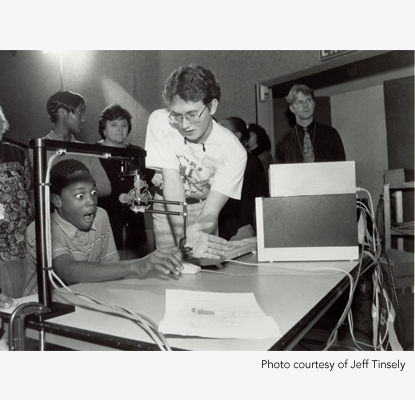