Saul Griffith's mission is "to do things in the least environmentally damaging way." His passion for the environment is evident in his inventions, such as his device for producing low-cost eyeglass lenses to reduce the cost and waste a small rural community incurs from keeping a large library of lenses.

Growing up in Sydney, Australia, Griffith, the 2004 winner of the $30,000 Lemelson-MIT Student Prize, comments, "I like to know how stuff works, how the world works." His parents have both been inspirational—his mother is an artist and his father is an engineer. Saul and his father once built a 3-ton hydraulic printing press for his mother, who runs a printmaking studio using Rembrandt-era technology. The press was so large that they had to take the roof off the studio in order to move it inside.

Griffith received his undergraduate degree from the University of South Wales, plus two master's degrees from both the University of Sydney and MIT. He developed his low-cost device for manufacturing eyeglass lenses after discussing the problems of costly eye care and glasses with the education minister of Kenya. Using programmable, changeable surfaces, he created a (patent-pending) portable molding mechanism that acts like a desktop printer for producing inexpensive lenses. He also created an auto-retinoscope that tests eye vision, which allows him to produce lenses tailored to varying prescriptions from his device.

Griffith's other inventions include an electronic rope, which incorporates electronically active fibers in the braid structure so that the rope can sense it's own strain, making it ideal for safety applications, and a recyclable 3D LEGO chocolate printer that enables kids to build their own toys and eat them. He also created a tangible interface glove from interwoven shape memory alloys that can transmit forces to the underlying skin, coupling the human sense of touch with a computer-generated world. In collaboration with Joost Bonsen, developed "Howtoons"—cartoons that teach kids science and engineering principles by building things out of accessible household materials.

In May 2004, Griffith completed his PhD thesis, which examined self-assembly and producing programmable materials and machines to make complex structures. Griffith and his colleagues then started the engineering/technology venture, SQUIDLabs, LLC in Emeryville, California, where he currently invents. A wind-surfer and ice "butt-boarding" enthusiast, he credits his peers as being great inspirations, noting that MIT "is so highly dense with people who are obsessive and passionate about what they do." 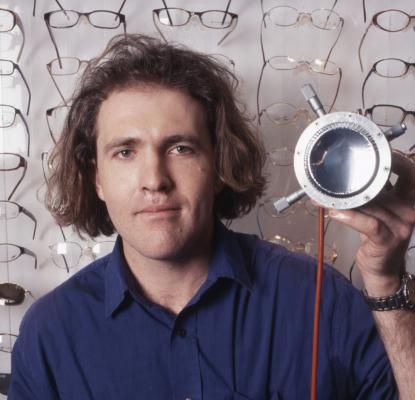