The life and career of Ramesh Raskar, PhD is dedicated to creating impact through disruptive high-tech inventions. He is a researcher, inventor, mentor, entrepreneur, and a change maker. He combines the best of the academic and entrepreneurial worlds to achieve milestones in improving the lives and health of people in industrial and developing societies. The first hint at his exceptional mind was when he finished first among hundreds of thousands of students in the statewide college entrance exam. He continued his outstanding academic performance during his study at the College of Engineering in Pune, India, where he was drawn to the study of computer graphics after being inspired by the special effects of the then-recently released “Jurassic Park.” At the University of North Carolina at Chapel Hill,his visionary PhD work on projector-based three dimensional graphics started the field of spatial augmented reality.

Raskar was always fascinated with the idea of using super-human abilities to visually interact with the world via cameras that can see the unseen and displays that can alter the sense of reality. Following graduation, he joined the Mitsubishi Electronics Research Lab (MERL) where he continued his research in creative uses of camera and projector techniques. His work there generated key ideas in several fields, produced over 40 patents, and resulted in novel products.

Raskar then moved on to MIT with a plan to launch entirely new fields. He founded the Camera Culture Group at the MIT Media Lab in 2008, where he focused on creating imaging devices for analyzing light transport in computational imaging. He also continued expanding his entrepreneurial activities, co-founding several high-profile ventures, including a camera that operates at the speed of light, vision diagnostics based on mobile technology, and real-life applications of his unprecedented discoveries, including transient imaging to look around a corner, a next-generation CAT-scan machine and 3D interaction displays.

Throughout his years of rapid career growth and success, Raskar felt compelled to create technology that responded to real and current needs in the world at large. His native town of Nashik, India hosts the pilgrimage Kumbh Mela every 12 years, one of the largest gatherings in the world with more than 30 million visitors. Raskar conceived of and hosted “Kumbhathon,” a year-round initiative to address challenges facing large populations in the developing world, bringing together experts, innovators, students and corporations to solve these challenges in real-time with technology, using the Kumbh Mela as an incubator. This initiative has since grown into the Emerging Worlds initiative, a platform for co-innovation that empowers smart citizens. The initiative now works from three hubs in India, with plans to quickly expand to Mexico, Central Europe, and other communities.

Raskar is the winner of the 2016 $500,000 Lemelson-MIT Prize for his groundbreaking inventions, commitment to youth mentorship, and dedication to improving our world with practical yet innovative solutions.

During his professional career, Raskar has mentored more than 100 students, visiting students and postdoctoral researchers. Raskar’s entrepreneurial experience gets young people excited about research, adding a unique dimension to classical academic education. His interviews on popular television programs and presentations, including a compelling 2012 TED Talk, “Imaging at a trillion frames per second,” make him an approachable and inspiring figure to many young people across the globe. Raskar’s open innovation work demonstrates his commitment to fostering the next generation of global talent. 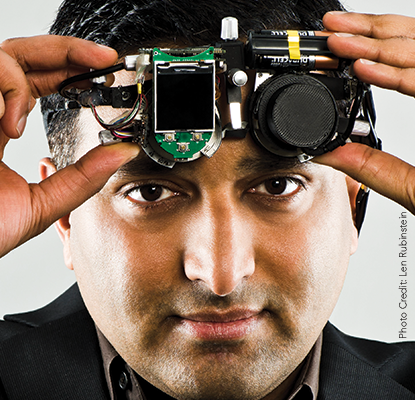