Geoffrey von Maltzahn’s inspiration to invent began during his youth and developed in what he describes as an “unintentional way.” He remembers appealing to family and friends to play strategy games with him, spending hours building with LEGO™s, as well as creating a system of strings and pulleys around his house to remotely turn on and off lights. Identifying problems and creating solutions for them exemplifies the core of invention, and putting this into practice has won von Maltzahn the 2009 $30,000 Lemelson-MIT Student Prize.

Von Maltzahn’s inventions span the biomedical realm. Specifically, building on innovations in inorganic chemistry, he helped develop a new class of therapeutics that provides more precision to cancer ablation. In order to minimize treatment side effects, von Maltzahn devised tumor-targeted antenna-shaped gold nanoparticles to convert benign infrared light into heat in tumors and ablate cancer cells. He also invented several systems in which synthetic nanoparticles communicate with one another in the body to more efficiently deliver drugs to tumors. These technologies can work collaboratively to treat cancer and are just the beginning of von Maltzahn’s innovation repertoire.

Growing up in Arlington, TX as a fourth-generation engineer, von Maltzahn began his path towards invention through his love and appreciation for art. The task of producing something from scratch and the creative freedom appealed to him. This, in combination with his extraordinary ability to solve problems, put him on the path to becoming an innovator.

By the time von Maltzahn moved to Virginia and began attending Thomas Jefferson High School, his interest in science and engineering began to take shape. He became increasingly fascinated with research and refined his interests in chemical and biomedical engineering as an undergraduate at MIT and then at University of California, San Diego, where he earned his master’s degree in 2005. During this period he discovered a passion for pursuing complicated and seemingly unattainable goals by collaborating with mentors and colleagues to generate new ideas.

This fervor fueled his enrollment as a PhD candidate at MIT’s School of Engineering where he works in the Harvard-MIT Division of Health Sciences & Technology. Here, von Maltzahn’s favorite pastime is brainstorming with a diverse community of students and professors to inspire new thoughts that can translate to his work. To date, he has taken 14 undergraduate students under his wing and exposed them to science outside the classroom setting. His inspiration for mentoring developed out of his relationship with his own student advisor and mentor, Sangeeta Bhatia, MD, PhD, who has encouraged him to challenge notions of possibility.

Soon to defend his thesis, von Maltzahn continues his love of art and strategy games. When he isn’t busy researching and helping build his companies, he frequently writes in what he laughingly calls his “ideas book,” where he explores a wide range of ideas as a way to solve problems and push scientific boundaries. 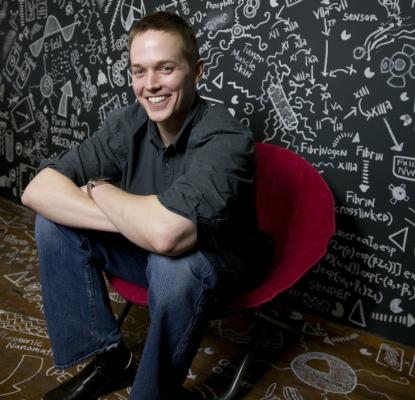