Catalin Voss, a 20-year-old student at Stanford University traces his passion for inventing back to his childhood in Heidelberg, Germany when he would tinker with LEGO robotics kits. Catalin has been working as a software engineer since he was 14. He began working alongside Silicon Valley legend Steve Capps at age 15 to design, develop and co-launch a mobile payment platform, PayNearMe, a collaboration that solidified Catalin’s career focus on problem solving and inventing.

Catalin, who will complete his BS and MS in Computer Science in June of 2016, was inspired through his active role at StartX, Stanford’s startup accelerator, to develop Sension; the technology that laid the groundwork for his Autism Glass invention.

The first iteration of Sension was a face tracking system that helped educators hosting online classes to better understand what educational content students found most engaging. Catalin realized through the success of this technology, that it could also be applied to help those with autism who struggle to understand facial expressions. Sension has since been acquired by a Japanese company, GAIA Systems, the majority of which is owned by Toyota.

Catalin attributes much of his success to those who have mentored him throughout the years. In turn, mentoring has become a very important part of his life. He provides advice and resources to young entrepreneurs as they apply to college. He also mentors groups of high school and college interns in their summer projects and regularly speaks at youth events and conferences. 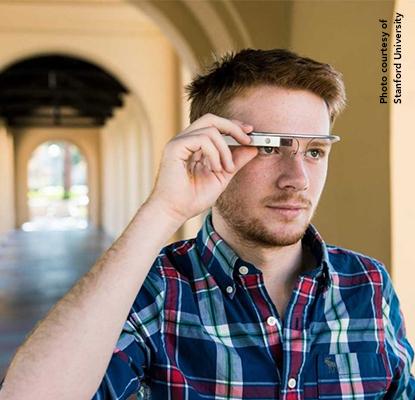