A concert pianist, architect and inventor since age eight, Brian Hubert has a track record of accomplishments in diverse fields. Hubert, who has been called a modern day Renaissance man, was awarded the $30,000 Lemelson-MIT Student Prize in 2001 for the breadth and variety of his innovations—most notably the world's first nano-assembly machine.

While working on his doctoral thesis, Hubert created a universal "pick-and-place" nano-assembly machine, capable of picking up and assembling thousands of atoms of almost any material at one time. His device could potentially be used for moving and patterning segments of DNA strands, ultimately enabling doctors to discover genetic-related diseases in a matter of minutes—long before the patient showed any symptoms.

In 2000, Hubert received a patent for his plastic memory chip. Composed of aluminized plastic, it is mechanically flexible and cheaper to produce than a silicon chip, but still capable of storing digital information, even when the power is off. The design is ideal for smart cards, digital cameras and portable computational devices.

Hubert was also granted a patent for a superconductor fabrication system in 1998. This low cost system consists of two moving parts and increases the efficiency of manufacturing superconductor wires, as it is able to operate unattended for a long duration.

One of Hubert's earliest inventions is the "Cheater Meter," created at age fourteen to measure the actual amount and grade of gas pumped at gas stations. This pocket-sized device compares the measurements to the fee charged to ensure the prices are accurate, or that one isn't being cheated at the pump!

In addition to his engineering feats, this Yakima, WA native has many other talents. Hubert is a concert pianist, violinist and music composer. Also skilled in architectural design, he has received several awards in championship drafting competitions. Hubert received his BS, MS (1996) and PhD in mechanical engineering from MIT. After graduating from MIT, Hubert co-founded Kovio Inc. in Sunnyvale, Calif., a nano-technology company developing revolutionary technologies for manufacturing microelectronics, where he serves as CTO. 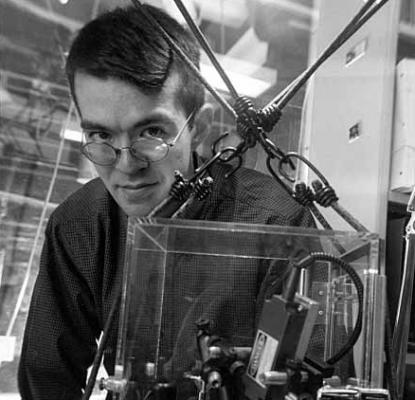